The EWWF conference brought together 200 representatives of the wildfire community from 14 different nations. The meeting was held from November 20-21 in Cardiff. The core theme of the conference was in relation with  fuel management. As described by Simon Thorpe, EWWF, understanding how to better manage fuels is key to reduce the wildfire risk before it is too late.

Marc Castellnou, chief wildfire officer at the Catalan Fire Service and President of the Pau Costa Foundation Advisory Board, set the scene for wildfire challenges in the UK and Atlantic Europe for the upcoming years:

The latter was also confirmed by Matthew Perry, senior applied scientist at the Met Office, that evidenced the increase of wildfire risk in the near future.  In particular, the UK is expecting warmer and wetter winters and hotter and drier summers.

Ron Steffens, Faculty at Prescott College and Incident Commander and Fire Analyst in Grand Teton National Park, reaffirmed the focus has to move from the wildfire to the fuel, “fuels are everything, fuels are where we live”, he sentenced. The way we manage our environment is key to address wildfire challenges.

Why is fire smart not happening? Alex Held (Senior expert from the EFI Resilience Program) questioned the audience. Held highlighted the great amount of fire knowledge that is available in Europe and  beyond, to carry out smart landscape management.  However, this type of management is not enough or even inexistent in many regions.

The key to success is to reach public opinion but for that, the fire community needs to invest in communication campaigns, added Held. Partnerships with social sciences and communicators are needed to reach the target, suggested the Senior expert.

Wildfire management in Portugal was also presented by Carlos Trindade, coordinator of the Municipal Civil Protection and Director of the municipal Heliport. He and his team carried out best practices in Mafra, Portugal. A fire prone area that has been impacted by wildfires several times. Trindade’s team has successfully engaged stakeholder and landowners to be an active part of landscape management using prescribed fire.

Finally, Claire Belcher (Director of the University of Exeter wildFIRE Lab) launched a call for science-management collaboration to collect data during wildfires and prescribed burns. Joining forces would help gain understanding of fire behaviour and improve in fire managent health in a much faster way than science or fire  management working separetly.

Other 18 participants and a number of posters presented several solutions that are being studied and implemented in the UK and around the world, most of them based on fuel management to reduce the wildfire risk.

After two days of fruitful knowledge-sharing in the EWWF Conference, the SURE Workshop took place led by the European Forest Institute. This workshop was dedicated to pro-active fire management. Certainly, it was the perfect setting to brainstorm and discuss with the international participants how ideas come into action. 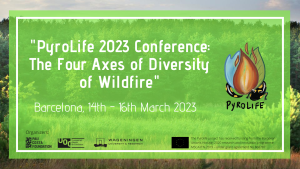 PyroLife 2023 Conference: The Four Axes of Diversity of Wildfire 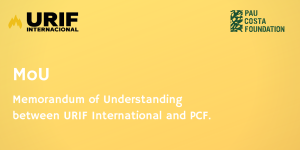 Agreement between URIF International and PCF

On November 1st, 2022, Pau Costa Foundation and URIF International signed a MoU (Memorandum of Understanding) to foster cooperation in matters such